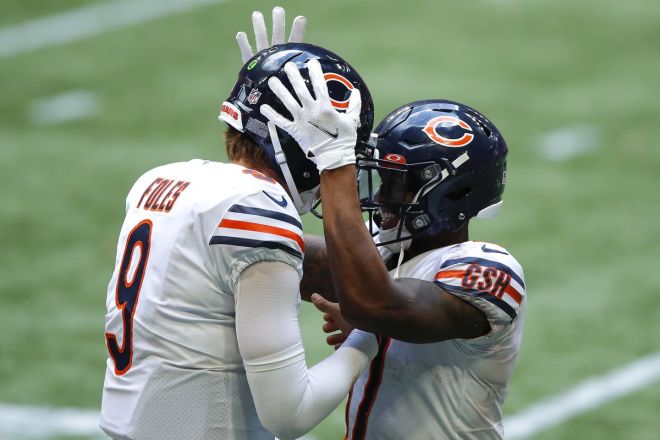 The year is 2046. The Albuquerque Mesas just defeated the Las Vegas Raiders in the AFC Championship game to advance to Super Bowl LXX, where they will take on the Philadelphia Eagles, making their first Super Bowl appearance in 29 years.

My hypothetical ten-year-old son walks into the room.

“Dad, who is this Nick Foles guy? They’re showing highlights of him on TV. But I’ve never heard of him!”

I tell him a magical tale of a guy who thew for 27 TDs and 2 INTs in one season, shattered QB rating records, took home a Pro Bowl MVP, an all-time playoff run capped off with a Super Bowl MVP, and finished his career in the top-30 all-time for passer rating.

My son exclaims, “Wow, he must’ve been a real superstar!”

He replies, “No way you’re telling the truth, Dad. I don’t believe you.”

And why should he?

Nick Foles is a case study in the absurd. A player that has magical powers when coming off the bench, but can’t for the life of him do anything while a full-time starter. He showed his magic once again Sunday, coming off the bench to throw 3 TDs in the Bears miraculous comeback against the Atlanta Falcons Sunday, where Chicago trailed 26-10 with less than 9 minutes left in the game. He did it again. After losing starting jobs for three different teams, Foles flashed stardom. It is a career of flashes, turns, and absurdity challenging our perception of narrative and the quarterback position.

Let’s throw it back a bit. The year is 2013. In week 5 Michael Vick goes down with a hamstring injury for the 1-3 Eagles, sending in backup QB Nick Foles, a third-round pick from the previous season that has the size to play the position, but never really did anything in college to make him a “can’t-miss” prospect.

What does Foles do in Vick’s absence? Rattles off an 8-2 record, throws for 27 TDs, 2 INTs, and a league leading 119.2 passer rating. A staggering 8.5% of his passes ended in touchdowns. These aren’t just “good QB” numbers, these are “MVP numbers.”

So this should end as the Eagles finding a diamond in the rough franchise QB, and Foles leads the Eagles to domination for the next decade, culminating with a Super Bowl win in 2018, right?

Foles earned the starting job for the next season, played average, got hurt, and signed with the Rams for 2015. Foles is awful with the Rams, throwing 7 touchdowns, 10 interceptions, a not-nice 69.0 QB rating, and is benched for Case Keenum 11 games into the season.

Now, the narrative sounds like Nick Foles is nothing but a “flash in the pan.” Perhaps he is meant to hold a clipboard and occasionally come into games when the outcome is no longer in doubt. The 27/2 season was fantastic, but was it just a product of Chip Kelly’s system that teams wised up to later in the decade? Who knows?

For a while, it looked like that narrative would hold true. Foles signed with the Chiefs for the 2016 season. Coming in for an injured Alex Smith, Foles torched the Colts with 223 yards, two touchdowns, and no picks on a 72% completion clip in a 30-14 victory. Foles started the next game, passing for 187 yards, another TD, and still no picks in a 19-14 win over the Jaguars. Alex Smith healed up, and Foles went back to his normal role holding a clipboard on the sideline, only seeing mop up duty in week 17 against the Chargers.

Foles has his role: competent backup, and embraced it signing back with the Eagles in 2017. The Eagles had a young rising star in Carson Wentz, who they picked 2nd overall in the 2016 draft. Foles was only there to once again hold a clipboard, and he did it well!

The Eagles started 10-2, and Carson Wentz looked like the favorite for MVP, torching opponents for 3286 yards, 33 passing touchdowns, 7 interceptions, and a 101.9 passer rating. The Eagles had the offense and defense to compete for a title. Then, near the end of the Eagles 43-35 victory over the Rams, Wentz went down with a torn ACL, leaving the reigns of a playoff team to Nick Foles, football’s favorite enigma.

Could Foles recapture the magic of his 2013 season four years and three teams later? In his three starts to end the season, His first start against an awful Giants team Foles threw for four touchdowns and no picks, but that success did not last. He ended the season throwing for 202 yards, one touchdown, two picks, and an awful 48.2 passer rating in his final two games. The Eagles finished the 2017 regular season 13-3, but did not look like the Super Bowl contender people expected one month prior.

Once again, Foles defied narrative and pulled off the unexpected.

Three games. 971 passing yards. Seven total touchdowns, a 115.1 passer rating, and a Super Bowl MVP in a shootout with the game’s greatest ever quarterback. The Philadelphia Eagles beat the New England Patriots 41-33 largely because of their backup quarterback, not in spite of.

The legend of Nick Foles might’ve reached his peak near the end of the first half, where Foles caught a TD pass on a trick play later immortalized as “the Philly Special.” These aren’t plays you give to a normal backup QB. These are plays that turn mortals into legends. Seriously. It’s immortalized.

So, Nick Foles lead the Eagles to the Super Bowl, and the 2018 season approached. Foles returned to his job of “keeping the seat warm” for Wentz, starting the first two games of the 2018 campaign while Wentz finished up rehab on his torn ACL. Of course, this isn’t the last we hear of Foles. Wentz goes down in Week 14, and it is deja vu. The Eagles are gunning for a playoff spot, and Foles has to step in and be the guy to try to repeat the magic of the previous year.

In the regular season, Foles looked like a competent starter, finishing with a 4-1 record and 96.0 passer rating. In fact, it appeared Foles re-captured his magic late in the season, finishing his final two games with 6 touchdowns, 2 wins, and a 115.5 passer rating. Could the Eagles repeat as Super Bowl champions with their backup under center?

The answer is no. Foles played poorly in the playoffs, throwing for 3 touchdowns, 4 interceptions, and a bad 70.6 passer rating. The Eagles won the wild card game, but fell to the Saints 20-14 in the divisional. The clock struck midnight for Football’s favorite cinderella.

Or so we thought.

It finally looked like Foles was going to get his shot to be a full-time starter. That lasted maybe one quarter. In his first game with the Jaguars, Foles started 5 for 8 with 75 yards and a touchdown pass before breaking his clavicle in his Jaguars debut. Sixth-round pick Gardner Minshew took over and stole the show, starting what many call “Minshew Mania” in Duval.

Minshew won over the hearts and minds of the Jacksonville faithful while Foles recovered, and while Foles had a brief stint as a starter, losing all 3 games with a pedestrian 80.9 QB rating, it was clear that the fans and team had moved on. Foles signed with the Jaguars to be their starter, and once again, left as a backup.

One year after signing a mega-deal with the Jaguars, Foles was traded to the Chicago Bears for a fourth-round pick, once again destined to be a backup. This time to much maligned QB Mitchell Trubisky. One may figure Foles to fade into obscurity and once and for all take his place as NFL backup.

Of course, like everything else in Foles career, nothing goes to plan. With a stagnant offense and a 26-10 deficit, Matt Nagy sent in Nick Foles to revitalize a passing attack that went nowhere for 42 minutes of game action.

Foles answered the call, doing what we’ve seen him do as a backup for nearly a decade: Three touchdowns. One pick. One win. The Bears overcame a double digit deficit midway through the fourth to advance to 3-0, thanks to an improbable comeback by perhaps the most improbable QB in NFL history.

Just another chapter in the books for Nick Foles.

Players like Nick Foles are the reason I watch sports. Everytime you think you have him pegged, he does something unexpected or extraordinary. We watch sports to see things unexpected, to make the “impossible” an infinite realm of possibilities.

Sure, it is fun to watch Patrick Mahomes and Tom Brady light up record books, but there is a certain beauty in players like Nick Foles, guys who keep finding ways to stick around and surprise year-after-year.

However, I still do not know how I’m going to convince my kids that Nick Foles is a real football player. Everything around his story is surreal. The ups, downs, highs, lows, and the idea that somebody who can be so good for extended periods of time can’t find a way to be a full-time starter.

Perhaps I’ll tell my future kids that he is a folk tale, like the Boogeyman, or Paul Bunyan. That is more believable, right?

Maybe I’ll mention Nick Foles to my kids one day. I do not know when, but someday. I’ll let them find out about Joe Flacco on their own.